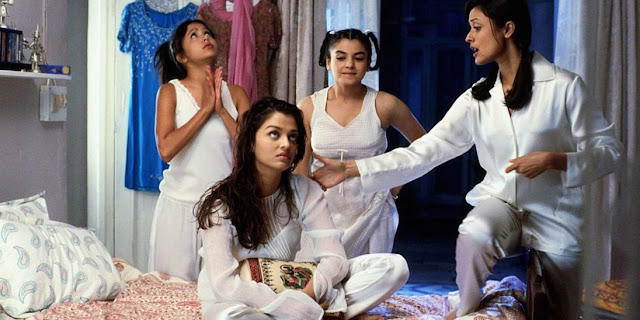 Today's theme for the Wednesday weekly blogging challenge (hosted at Long and Short Reviews) is about feel-good films or books, the ones you reach for when you need a pick-me-up. And we could all use a bit of that right about now. Not long ago, I watched Blinded by the Light on a plane. It was so lovely (if a bit cringe) and full of good stuff, and it made me forget for a little while that I had hours and hours left before my feet touched land and I could get a proper sleep. Gurinder Chadha is a writer/director I love, and I always come away from her films feeling a little bit better. I couldn't pick just one to talk about, so here are my favourites and why I love them:

(Crying at the way they've dubbed the Essex accents in this trailer...)


Apart from the soundtrack and the noughties nostalgia, there's no definite reason why I find this so feel good. The story of a British Indian girl who wants to play football professionally, I love the characters and the fact that - although there is some romance - it's a female focused film that isn't just a love story.


Pride and Prejudice meets Bollywood - you can't go wrong here. I've been known to watch this like three times in one day, because it just makes me so happy. Probably not everyone's cup of tea, but if you like Jane Austen I'm pretty sure you'll enjoy this.

From the minute they start playing 'She's So Lovely' as Georgia runs down the street dressed as a stuffed olive, I know I'm just going to sit and watch the whole thing. I love this partly for the nostalgia (I was the right age for this when it came out) partly for the English-ness and partly for the soundtrack. Also because, despite how weird it is (the way they talk and act is not normal for the UK honestly) I definitely think it's more accurate to my teenage experience than the majority of teen films.

Blinded by the Light

This is a new one for me, and I didn't like it quite as much as the others, but it was still a lot of fun. It's sad in places, touching and occasionally grim. And sometimes you might have to hide behind a cushion from embarrassment. But it's hopeful and uplifting too. I'm also starting to discover Bruce Springsteen, so that can only be a plus.

Seen any of these? What's your favourite feel-good film?

Popular posts from this blog

One of the best animated films of the nineties, despite not being made by Disney (although people will argue with you that it is Disney, until they're blue in the face - or you make them google it) Anastasia was fresh and original, with great songs, a strong-willed heroine and one of the most attractive heroes in any kids movie. Yes, I know he's a cartoon. Set amid the aftermath of the Russian revolution, Anya is the princess who's forgotten her past, while Dimitri is the con-man who helps her remember. Anastasia taught a generation of little girls who the Romanovs were (I knew all the sisters' names and that the brother had a blood disease) and now it's coming back, all set to become a Broadway musical.
But this isn't the first time the story has been re-worked for a new audience. The 1997 version is in fact a re-make, based on the live-action (sadly non-musical) 1956 film, starring Ingrid Bergman and Yul Brynner. To celebrate the announcement of the new sh…
Read more

In an age where Disney is churning out live-action re-makes one nail-biting release at a time (they've been good so far, but that doesn't mean there's not going to be a travesty somewhere along the line) it's odd to think that it sometimes works the other way around. I saw the 1999 20th Century Fox re-make of The King and I at the cinema (and enjoyed it!) so I don't feel the same animosity towards that version as some do. Still, I can appreciate it's ridiculousness, and I thought it was time for a review.
(For other cartoon/live-action comparisons, see Anastasia and The Jungle Book.)

The King and I is (loosely) based on the true story of Anna Leonowens, a British woman who travelled to Siam (now Thailand, if you were wondering) to become schoolmistress to the children of King Mongkut, in the late 18th century. There have been multiple adaptations of the story, but the most famous was released in 1956 and won five academy awards, including Best Actor for Yul Br…
Read more 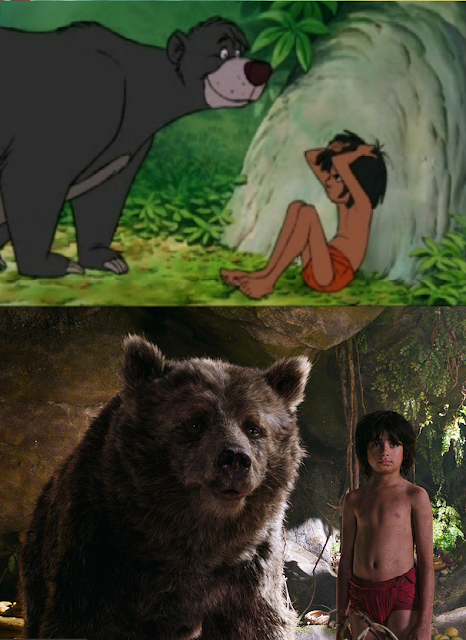 So, I finally went to see The Jungle Book. I'm not sold on the idea behind these live-action re-makes (although I did like Cinderella) but this one exceeded my expectations. In fact, it was the best film I've seen at the cinema in a very long time. Having recently compared Anastasia (1997) to its live-action incarnation (here) I thought I might start a bit of a series!

The original Jungle Book is one of Disney's best-loved animated classics and the last one to be personally supervised by Walt Disney himself. Very loosely based on Rudyard Kipling's novel, it tells the story of an orphaned boy raised by wolves in the jungles of India, who discovers that he's being hunted by Shere Khan the tiger and so is compelled to return to the 'man-village.' Featuring a loveable cast of animal heroes and villains, including Bagheera the panther, Kaa the snake, King Louie the orang-utan and (most people's favourite) Baloo the bear, it's a simple, lively story with…
Read more