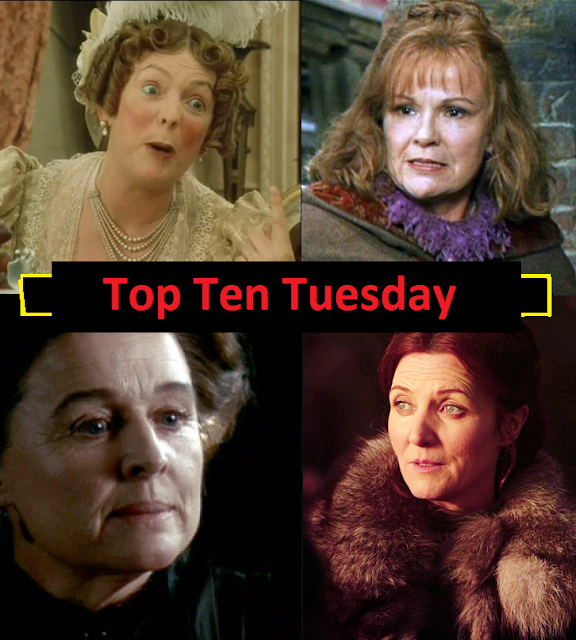 When I saw the topic for this week's Top Ten Tuesday (a weekly link-up hosted at The Broke and the Bookish) I had a bit of a panic attack. Mother's Day??? And then I realised that we had Mother's Day ages ago in the UK, and I did get my mum a card and a present in time. Phew. Anyway, here's my list of memorable mothers in books. Got to say, I struggled slightly (I found it much easier to make a dads list). Book mums generally tend to be awful or, well...dead.  Maybe this says something about our patriachal society, but I suppose it's good to show mothers as real people, rather than angelic beings. Plus, traumatised children often make for more interesting characters. Anyway, here are a few of my favourite fictional mothers, the good and the not-so-good, in all their flawed glory. Enjoy!

from the Harry Potter series

“Now, you two – this year, you behave yourselves. If I get one more owl telling me you’ve…you’ve blown up a toilet…”

There are loads of mother figures in Harry Potter, from the tragic Lily Evans to the unpleasant Narcissa Malfoy, who nevertheless loves her son more than anything. But the No. One Mum award has to go to Mrs. Weasley. The Weasleys don't have a lot of money, and they have plenty of flaws between them. But their defining characteristic as a family (other than the red hair and freckles) is the love they have for each other. Mrs. Weasley is the matriach, a stay-at-home mum but never just a caricature of domestic perfection (although she's certainly a great cook). She's kind and fierce, prepared to fight for what's right as well as for her family. Harry has plenty of father figures throughout the span of the seven books, but Mrs. Weasley is the only person who has really been a mother to him (that he can remember, anyway.) And he couldn't have asked for a better.

from The Casson Family series

“I always say a little prayer when I put cakes in the oven,” remarked Eve, as she stopped to kiss Rose good-bye.

The Cassons, stars of a teen series by Hilary McKay, are probably my favourite fictional family of all time (see my top ten). Eve is a 'garden shed' artist, wife to a mostly absentee husband and mother to four children (one of whom is actually her niece) as well as the occasional waifs and strays who make themselves at home amongst her family - her children's friends, boyfriends etc. Perhaps this is the reason she spends a lot of her time in the shed at the bottom of the garden.  Scatty, often neglectful, and with a complete inability to remember when to buy food, Eve is nevertheless a lovely mum. Very very kind, creative and encouraging.

from Pride and Prejudice

"Oh! Single, my dear, to be sure! A single man of large fortune; four or five thousand a year. What a fine thing for our girls!"

When I started trying to think of fictional mothers, Mrs. Bennet was the first to spring to mind. Maybe not the best mother in the world - she's hugely embarrassing, has favourites, and anyone who'd try to force their child to marry Mr. Collins should probably be crossed off the good parent list, but her desperation to get her daughters married does come from a practical place. Plus, she's a lot of fun to read about.

"Oh, don't be silly, Bridget. You'll never get a boyfriend if you look like you've wandered out of Auschwitz."

Bridget Jones pays tribute to Jane Austen's Pride and Prejudice in a number of ways, and in Bridget's mum Helen Fielding has created a perfect Mrs. Bennet (with a bit of Lydia thrown in ) for the modern day. A suburban middle-class English mum, with her Turkey curry buffets and her determined match-making, Pam Jones is a perhaps a bit of a caricature, but she's still a woman that you can imagine actually meeting. And she makes me laugh just as much, if not more than, Mrs. Bennet.

from North and South

“She's too good an opinion of herself to think of you. The saucy jade! I should like to know where she'd find a better!”

Mothers of sons are an interesting breed, at least in literature - usually more doting and more possessive than mothers of daughters. In Elizabeth Gaskell's North and South, the hero, John Thornton is definitely a mummy's boy, but we love him anyway. I love Mrs. Thornton too, although I think I'd rather die in a mill accident than have her as a mother-in-law. She's fierce, sarcastic and down to earth. She's held her family together in the hard times and is deeply proud of, and loyal to, her son. You would be though, wouldn't you?

from The Illustrated Mum

I was a big reader of Jacqueline Wilson as a kid, although her books always made me cry. The family set ups were always very different from my own, but this didn't stop the main characters from being easy to empathise with (reading her books now is a little spooky - she conjures up so vividly the way it felt to be ten or eleven). The Illustrated Mum tells the story of single mum Marigold (the title refers to her tattoos) who is a manic depressive (among her other problems) and her two children, ten year old Dolphin and twelve year old Star, who has to do most of the mothering in the family.  Through the eyes of Dolphin, you see the wonderful things about Marigold, and how much the girls love her, which makes her failings as a mum all the harder to deal with. Definitely a weepy one.

from Anne of Green Gables

"But have you ever noticed one encouraging thing about me, Marilla? I never make the same mistake twice". "I don't know as that's much benefit when you're always making new ones".”

When Marilla Cuthbert and her brother Matthew contemplated adopting an orphan, they'd planned for a boy to do the farm work. What they got was a talkative, romantic and imaginative girl. Old maid and old bachelor, they nevertheless find themselves suited to parenting, and I love the relationship between the stern, practical Marilla, and Anne, who is her opposite in a lot of ways.

from The Princess Diaries

“Mom’s been depressed ever since her last boyfriend turned out to be a Republican.”

Mia Thermopolis's Mum is a New York artist, a fierce feminist and a lot of fun, so we can excuse the fact she lied to Mia throughout her childhood and then married one of her teachers. (Mr G was a good choice anyway, since Mia was failing Algebra.) Despite her whining, Mia is quite a well adjusted kid, and that's got to be down to her mum. She never makes a big fuss about Mia being a Princess and she puts up with Grandmere, which is saying something.

from the A Song of Ice and Fire series

“The singers make much of kings who valiantly die in battle, but your life is worth more than a sword. To me at least, who gave it to you.”

As in Harry Potter, there're more than one memorable mother in Game of Thrones, but the one who sticks out the most, for me, is Catelyn Stark. For her failings as well as her admirable qualities. Strong and brave in desperate situations, Rob is her eldest child, her darling, but she finds it difficult when he suddenly becomes her King. A king who risks his life everyday and who has to make difficult decisions, like choosing not to ransom his sisters... Fiercely loyal and a good mother to her own, her main problem is she's so vile to poor Jon Snow. Was there any need to be so horrible? Cersei Lannister is the other Thrones mum that stands out for me. After all, her one redeeming feature is that she loves her children - that and those cheekbones.

from The Corfu Trilogy

“It's all your fault, Mother,' said Larry austerely; 'you shouldn't have brought us up to be so selfish.'
'I like that!' exclaimed Mother. 'I never did anything of the sort!'
'Well, we didn't get as selfish as this without some guidance,' said Larry.”

I'm enjoying the new series of the Durrells, and although the mum has a few less love interests in the book, she's got just as much on her plate. Vague, very English and pretty laid-back all things considered, Louisa Durrell deserves a place on this list just for dealing with her mad kids. Also for taking her family off to live in Corfu for no real reason. Sounds good to me!

Have you got a TTT this week? Who are your favourite fictional mothers? 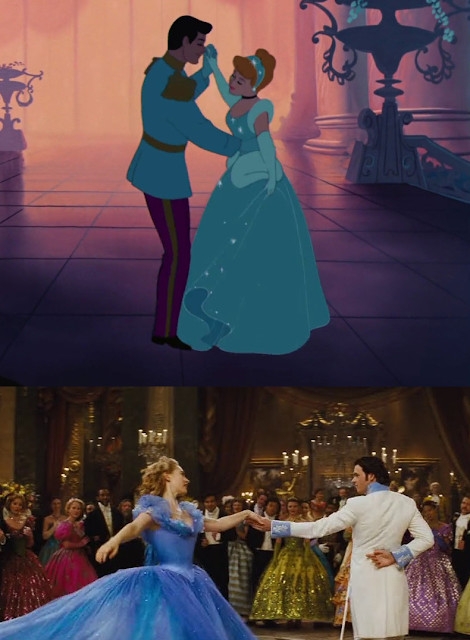 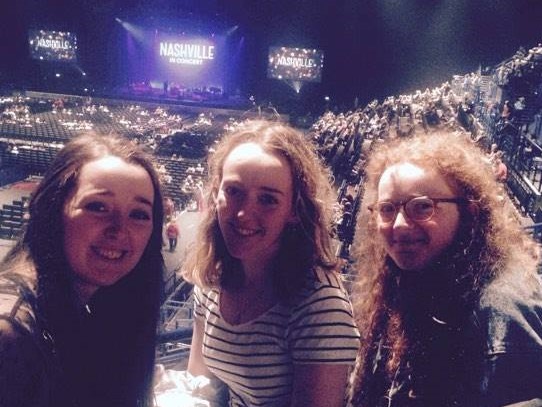 This blog has turned into nothing but reviews again, which isn't a surprise, but what might surprise you, is that I do occasionally do things other than read and watch TV (I know, shock horror) and last week I went to the Nashville Tour! If you're not aware, Nashville is an American TV drama about the country music industry - and if you appreciate great writing and acting, engaging characters, soapy story-lines and country music you should definitely try it! (Although season 5 is pretty dire, got to be honest.) I've been a 'Nashie' since season one and I'm not the only one in my family, so when the tickets came on sale we couldn't resist. *In case you're planning to go to another of the UK shows, the following contains set-list SPOILERS*   On Friday my two sisters, my mum, dad and I, traveled down to Birmingham's Barclaycard arena (Gunnar wasn't doing the Manchester show) to indulge our mutual love of ABC's Nashville and its musi