'Teaser Tuesday' is a link up hosted at The Purple Booker (I think - it keeps moving around!) To join in, turn to a random page in your current read and share two teaser sentences. This week I've been reading Sofia Khan is not Obliged by Ayisha Malik. I've been trying a few new books lately (I work in a library Saturday mornings so always like to take something home - because, free!) and it's been a while since something's really held my interest. But I loved Sofia Khan! Here's your quote: 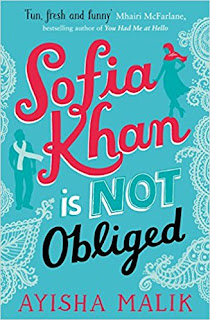 '10:55pm. Of course it's not important whether someone's read Harry Potter or not. Except they must have been asleep for the better part of this century. Also, one shouldn't off-handedly disparage something they've not read.
11pm. Though I reserve the right to do so for self-published erotica. Obviously.'


The book has been described as a Muslim 'Bridget Jones' and although it sounds disparaging to compare the two, it is actually quite a good description. A rom-com about a thirty year old book publicist in London who has a great group of friends, worries about her weight and is always sneaking a cheeky fag? Written in diary form? Come on, there are definite similarities. The biggest one being that I loved and related to Sofia as much as, if not more than, I did with Bridget. Because she was Muslim there was also the added interest of learning something about another culture, although there are few things I need to go look up (like the India/Pakistan conflict. I feel very ignorant all of a sudden. Also some of the terms of endearment the family use.) The romance was really well done too. I liked the way Sofia's feelings were conveyed, they felt very real, and the turns things took often took me by (pleasant) surprise. I was rooting so hard for a certain someone by the end - they were so sweet together! The characters in general made the story, to be honest. They all felt like real people and I particularly liked Sofia's mum. She was unexpected, I thought.

I can't think of many negatives. Perhaps the book was a tiny bit over-long, it took me a little while to distinguish Sofia's friends from one another, and as much as I loved the ending, I don't know how convinced I was by it. (Also, I've lived in England my whole life and I've never heard of Lemon Puffs. Maybe they're a southern thing?) Overall though, this was a really great book, especially for a debut novel. It made me laugh out loud a few times, and I also cried more than once, which is always a good recommendation I think. It was an easy read and very current, with like-able characters and a really relate-able heroine. Will have to look out the sequel now!

Got a teaser this week or have you read Sofia Khan? What did you think?